According to the U.S. Department of Energy, 25 to 35% of energy wasted in buildings is due to inefficient windows.  The California Energy Commission estimates that around 40% of a typical building’s cooling requirements are due to solar heat gain through windows. Given these facts, it’s likely that you could make big strides in energy savings by improving this exterior building element.

When it comes to making sure your windows are as energy-efficient as possible, you’ve got a few options. So that you can make the best choice for your facility, we’re comparing standard solar-control window film, low-e window film, and low-e window characteristics. We’re evaluating these choices based on:

U-value and emissivity values vary for standard window films, depending on the type of film, with emissivity values ranging from 0.70 to 0.81, which means that 19 to 30% of the room’s heat is reflected back into the room in the winter to help reduce heating costs.

While providing excellent savings during cooling season, these window films reduce solar gain through windows year-round, even when heat gain might be helpful (during the winter). In climates with prolonged heating seasons, these window films can increase the amount of heat needed from the building’s HVAC system.  Overall, these films provide excellent net savings and an attractive ROI.

Typical ROI depends on many factors for any window film or window replacement project, such as type of film, window-to-wall ratio, type of existing glass, energy rates, type of heating and cooling system, overhangs, adjacent buildings, etc. For this article, a modern 10-story, 150,000-square-foot building was used as the model. It was evaluated for energy savings across a variety of climates based on national average energy rates using the U.S. Department of Energy’s EnergyPlus program.

The total installed cost of standard window film products can range from $9 to $15 per square foot.

These window films are installed on the interior surface of the window, which means that building occupants will most likely need to be relocated for a very short time (sometimes only a matter of minutes) for the installation process, depending on how close they are to the windows. Being in the same room as the installation has no negative effects on occupants. Installers place drop cloths on the floor and cover/move furniture, if necessary. Then they clean and prep the glass, and use a special mounting solution, squeegee, and cutting blades to fit the film to the glass. It’s a fairly quiet process, and shouldn’t be too intrusive for occupants nearby. Once the film is applied, building occupants can move back to their spaces (if they had to relocate). It can take from a few days up to a month for the film to completely cure and bond to the glass, depending on climate and the type of window film. It’s recommended that nothing is placed on the windows (tape, window clings, signs, etc.) until the film is completely cured.

How the outdoors look through standard window film depends on the type of film you choose. Darker window film reduces the amount of sunlight streaming into the interior space; darker (less than 20% visible light transmission) or reflective films (visible reflectance of 30 percent or more) can make it difficult to see outside on a cloudy/rainy day or at night.

With most window films, building occupants will still be able to enjoy views to the outdoors on the vast majority of days, although the scenery may appear darker if a low visible light transmission film (less than 20%) is used. With reflective window film, shades, drapes, or blinds might be necessary to reduce unwanted reflections or provide privacy at night.

Low-e films offset the loss of free solar heat during the heating season (unlike standard window films) and normally provide both cooling and heating savings. Low-e films improve window insulating performance 24/7, while only limiting solar heat gain in winter for 2-3 hours per day on sunny days (which are less frequent than in warmer months). The low-e coating reduces heat loss in the winter; during the summer, it reduces non-solar heat gain.

Payback for low-e films ranges from 2-5 years. These films usually offer a faster ROI due to all-season performance and typically high heat rejection properties in summer. Low-e window film can be installed in most commercial spaces for between $5 and $8 per square foot. Some recently introduced high visible light transmission low-e films (70% visible transmission) are more expensive, with installed costs of $12 to $15 per square foot. Payback figures shown do not include these high light transmission low-e films.

The same process is followed as installation processes for standard window films (see above).

Warranties for these products range from 15 to 25 years.

Newer low-e films are designed to be spectrally selective and reflect infrared light while allowing visible light to pass through. This allows natural lighting into a space while minimizing heat allowed through the windows. Some older, conventional low-e films can display an iridescent appearance when installed near certain types of energy-efficient lighting (like compact fluorescents). Newer low-e coatings are available that virtually eliminate this iridescence.

Low-e windows have U-value and emissivity values that range from 0.02 to 0.20, which means that 80 to 98% of the room’s heat is reflected back into the room in the winter.  Very low-emissivity windows offer the best improvement you can obtain in window insulating performance. Low-e windows offer the warmest glass temperatures in winter, which offers highest occupant comfort.

Based on national averages from RSMeans data, removing existing dual-pane windows and replacing them with dual-pane low-e glass costs between $40 and $55 per square foot. Adding low-e dual pane glass offers somewhat greater energy savings than either type of window film, but at a much higher initial investment. As such, the ROI for these products tends to be in the 20-to-30-year range.  Note: This is for glass replacement only, and does not include replacing window frames. If frame replacement is necessary, costs will increase and paybacks will be longer.

When new windows are being installed in your commercial building, building occupants in the area need to be relocated. The time it takes to install new windows depends on the condition of the existing windows being removed, how many windows you’re replacing, and what’s being replaced (a complete tear out vs. retaining window frames, etc.). For each window, you can anticipate between 20 and 60 minutes of installation time, depending on the type and size of the window. Depending on the time of year, parts of your facility may not be accessible while old windows are being removed and new windows are being replaced.

Warranties for low-e glass as part of a retrofit project are typically 10 years.

Whether you choose to replace your building’s windows or install window film on existing windows, any of these options is a smart move toward an energy- and cost-efficient facility. After evaluating the differences in insulating performance, ROI and initial costs, installation processes, warranties, and the effect on occupants, you should be able to make an educated decision about which option is right for your building environment. Any improvement you make to the insulating performance of your windows is a step in the right direction. 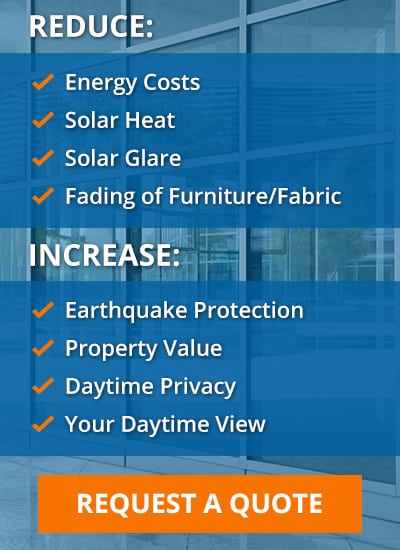